The Alamo Theatre building is Northeast Historic Film’s home. It was built as a cinema in 1916. The life of this cinema spans the heyday of moviegoing. Many local residents remember seeing movies in the Alamo, as do some summer people who arrived for the movies by boat.

We have enjoyed this Main Street gem since 1992, and from a devastated shell with water flowing through the dirt basement and plywood floors, we created a community cinema on the ground floor. Upstairs is the Study Center, technical services, distribution, and administration. 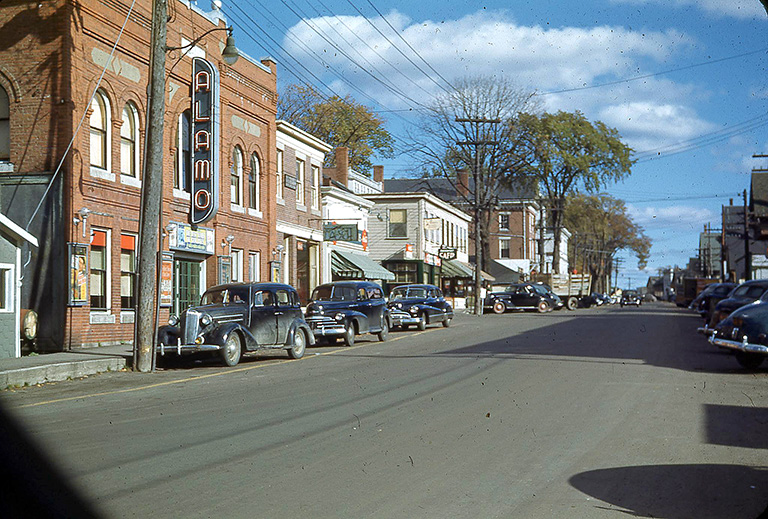 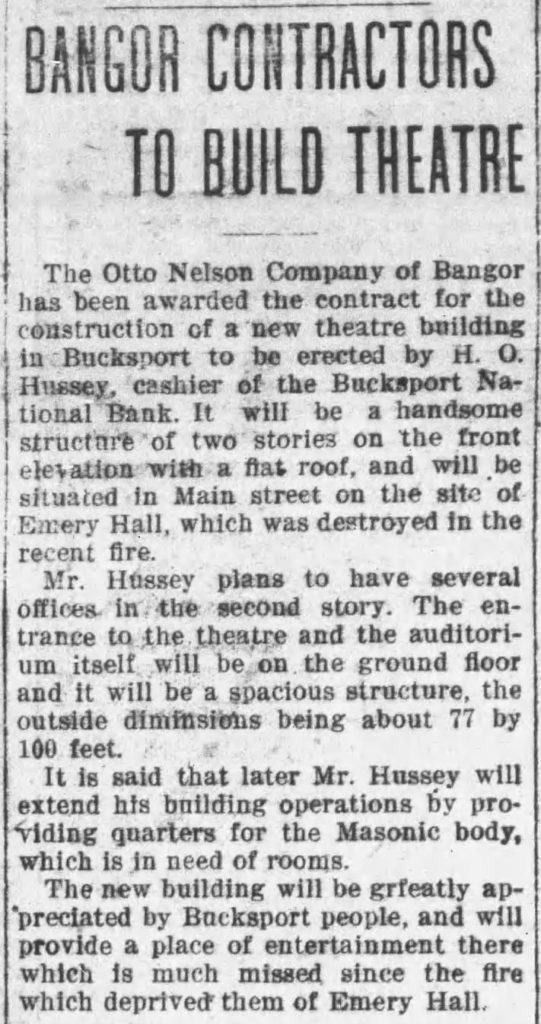 History of the Cinema Building

The Alamo Theatre in Bucksport, Maine, is one of New England’s oldest standing structures built as a cinema. The history of the building is relevant to Northeast Historic Film’s mission as a moving-image archives, and our interest in the history of moviegoing.

In May 1916, O.J. Hussey bought land on the corner of Main and Elm Streets. He and May Hussey erected a 90-foot-long brick building and called it the Alamo Theatre. It had 600 seats, a motion picture screen, an asbestos-lined projection booth, and a fully rigged stage for live performances.

In 1924 Arthur Rosie bought the Alamo Theatre and ran it as a motion picture theater with occasional live performances by touring companies, local people, and community occasions such as dances and graduations. Some hand-painted backdrops are still hanging, rolled up, in the space that was the theatrical fly backstage.

Bob Rosie, Arthur’s son, was four when his father moved the family into the theater. Bob took over the business after his father’s retirement. Bob Rosie and his wife, newly married in 1945, lived for six months in the second-floor offices facing Main Street. “We had matinees for kids with 14-cent tickets,” he recalls. Fifteen-cent tickets had a tax on them. The last movie we showed was Godzilla in May 1956.” Since 1956 the Alamo has been an A&P grocery store, a health clinic, a slot-car track, a bar and restaurant, and a videotape rental store before being boarded up, awaiting its restoration as a cinema.

What Kind of Name is That?

The original Alamo, a mission in San Antonio, Texas, has popular culture resonance beyond its religious and military history. There have been many movies about the 1836 battle at the garrison, one of which, The Immortal Alamo (1911), was made in Texas by the Meliès Company. “It would be a stolid audience indeed that failed to respond to the thrilling scene inside the Alamo.” (June 1911 review, Motography).

There were Alamos in Illinois, Georgia, and Washington, DC, where, according to the Theatre Historical Society of America, a 230-seat Alamo built in 1911 lasted as a cinema until 1964.

Northeast Historic Film bought the vacant and boarded-up building at a foreclosure auction in 1992 with funds from members and friends of the nonprofit organization. The NHF staff, then three people, with the help of Bucksport students, began to move mountains of debris. Phil Yates arrived and spent a winter driving a backhoe in the basement, taking out 50 truckloads of mud. There were potluck suppers and 16mm film shows among the renovations—and “Romance in the Parking Lot” movies outdoors. In May 1999 the new 35mm projection booth threw the first light on the 20-foot screen.

“A new preservation policy must emphasize education, prevention of decay, and closer integration with outreach activities that make film accessible to a wider audience.” From the Library of Congress study, Redefining Film Preservation, A National Plan.

In the Alamo Theatre we present all kinds of film, from contemporary Hollywood productions to the work of local filmmakers. The auditorium was designed with the support of the community, and serves the local schools for a variety of performing arts activities as well as film and video. The facility offers excellent sightlines, fine acoustics, audio reproduction, and projection capabilities.